How to buy
Latest

Hospital-onset COVID-19 cases plummeted by 75% in North Lincolnshire & Goole NHS Foundation Trust after they introduced 30 Redirooms to their admissions and short-stay wards. We catch up with Infection Control Team Leader, Linda Barker, to find out how they did it.

“Unless you have a hospital of all private rooms, you never have enough isolation spaces,” says Linda Barker, Infection Control Team Leader at North Lincolnshire & Goole NHS Foundation Trust. 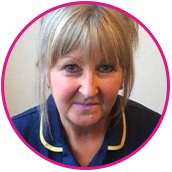 Linda is not long back from this year’s ECCMID conference, where her and her team presented their results of their novel approach to isolation for admissions wards. At a time where community cases of coronavirus in their area were far above the national average, Linda’s team managed to boast some of the lowest rates of hospital-onset COVID-19 in the country.

In October 2020, the team at NLAG were faced with a familiar issue: their admissions wards just didn’t have enough isolation rooms to deal with the usual winter pressures and COVID.

When hospitals don’t have enough isolation facilities to meet demand, most patients on the admissions ward need to be cared for in multi-bedded bays. This creates a vicious cycle: on the open ward, a single positive case could spread to other patients within the bay.

This, in turn, creates greater demand for isolation – with positive patients and confirmed contacts adding to the list of those awaiting an isolation bed.

To break the cycle, IPC teams typically turn to solutions such as “cohorting” (grouping patients with a particular, known infection in a particular bay) or bay closures (treating the entire multi-bed bay as an isolation area for one or more patients).

Both approaches reduce overall bed capacity. On an admissions ward, one extra bed can be the difference between a patient waiting for hours in an ED corridor, in an ambulance or them being admitted to receive the care they need.

Staring down the start of one of the toughest winters in living memory, Linda and the team at North Lincolnshire & Goole looked for a different approach.

“We put Redirooms initially on the admissions wards and the short-stay wards. But also bearing in mind they could be used anywhere they’re needed,” says Linda.

The team quickly transformed the admissions units at Scunthorpe General Hospital and Diana Princess of Wales Hospital. Patients would be placed in a Rediroom until their test results were received.

“It was a win-win situation,” Linda explains. “Even if the patient in the Rediroom turned out to be negative, if someone else on the ward came back positive, the Rediroom would help keep that first patient safe. It’s one less contact to worry about.”

Between the hard work of the Trust staff, the Redirooms and the introduction of day 3 testing, NLAG were well prepared for the tough winter.

And it worked. Against the backdrop of soaring prevalence in their community (the higher-than-average cases in the area resulted in a Tier 3 lockdown), North Lincolnshire & Goole NHS Trust posted some of the lowest rates of hospital-onset COVID-19 in the country.

For their efforts, the team were nominated for the HSJ’s Patient Safety Award in the Infection Prevention & Control category, and were invited to present their findings at this year’s ECCMID conference.

"It’s not always easy to secure funding for IPC", Linda admits. So how did they do it?

“As a team, we’re very good at keeping data and using evidence,” says Linda. “Although we were losing a bed to put the Rediroom up, we were able to show that we were actually increasing the total number of available beds because we were preventing ward closures and bay closures.”

Factoring in the cost of ward closures and outbreaks, Linda estimates Rediroom made for a cost-effective intervention – echoing work published in the Journal of Hospital Infection last year.

Read blog post: Preventing the spread of HAIs: the need for flexible, rapid isolation in the healthcare environment

But, of course, it’s not just about the financials, we’re dealing with patient safety. “From the data we collected,” says Linda, “we were able to prove not just that we could save money, but keep more patients safe.”

The IPC Team were the drivers. But Linda tells me just how important it was to engage with Operations, Incident Control and the staff on the wards.

“We picked Rediroom champions. That’s the key when implementing anything new: get good champions.” Linda tells me how they assembled a team of nurses, HCAs, Care Navigators and matrons across their sites who were well trained on how to setup and tear down the Redirooms.

They even created a centralised database of “Rediroom champions.” If a patient on a far-away ward needed isolating out of hours, all the local ward staff had to do was check the database for a Rediroom champion to come and support them 24/7.

The team even added Rediroom demonstration videos to a section on their intranet site.

Of course, with an intervention like this, getting patient buy-in is vitally important. The team conducted a survey of occupants to gauge their perception.

“Felt safe is the phrase we heard a lot,” says Linda. The team explained why they're using a Rediroom as part of the admissions criteria for occupants and neighbours. When you took the time to explain what the Rediroom was for, the team found it helped patients find comfort in the presence of a Rediroom.

“You do have to choose the patient.” Linda explains. But, when you take the time to explain how the Rediroom is keeping them safe, patients can become powerful advocates.

Linda recalls an elderly gentleman in a bed opposite a Rediroom who, to make sure the feature was used, would use his walking stick to point out the kick-plates to approaching staff.

With COVID numbers in the Trust dropping, how are the team using their learnings?

At Scunthorpe General Hospital, the Redirooms are staying up. Because each Rediroom fits within a single bed space, they’ve allowed the admissions unit to increase their isolation capacity without losing any bed spaces.

At Diana Princess of Wales Hospital, smaller bed spaces in the admissions unit mean removing an extra bed to allow for each Rediroom. Even still, Linda explains that, because they reduce the risk of bay and bed closures, the Redirooms can actually increase overall bed capacity. The hospital has kept up their Redirooms on the short-stay ward and are using the others responsively whenever a suspected or confirmed infection is found.

Linda mentioned, two Redirooms had already gone up that morning – one for a patient with influenza, one for MRSA. Both were used to isolate admitted patients when permanent, fixed isolation facilities reached capacity.

“COVID drove us to get them in the first place but we already use them for other things. MRSA for example. It spreads via contact so we can place a patient who’s colonised in a Rediroom and free up our permanent isolation spaces for higher-risk infections.”

To speak to us and find out more about Rediroom, fill out the contact form on our Rediroom webpage. Help spread awareness by sharing this article on social media.

We caught up with GAMA's female engineers, Anria and Caroline. Th…

Highlights from the Association of Continence Advi…